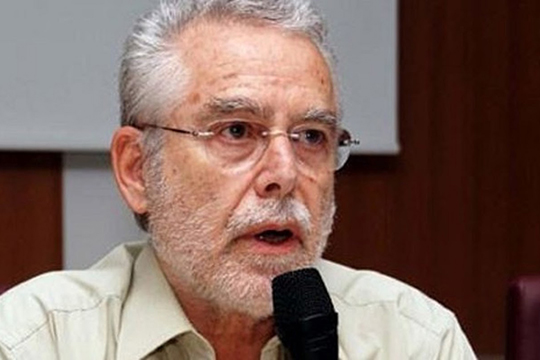 -Mr Oran, in youropinion, to what extent the recent processes inside Turkey, first of all I mean parliamentary elections and its results and Kurdish issue, affected on Turkey’s foreign policy in the region, especially in Syrian conflict and Turkish-Russian relations?

Turkey’s foreign policy is totally under the tutelage of Mr. Erdogan, as everything is in Turkey. Let’s begin there.

This means: Turkish foreign policy is now constructedwith an aim to create polarization, tension, and insecurity in domestic politics. That’s the method Erdogan uses to keep not only his Islamist electorate but an important part of the Turkish public opinion behind him.

And this method works. His approval rate concerning theshooting down rose toan unbelievable 91.6 per cent. That’s exactly how he had won Nov. 1stelections: Creating insecurity after June 7 elections through his anti-Kurdish policy. This, of course, with a great help from PKK’s most irrational policy, and with a great help from Mr. D. Bahçeli.

To shootdown a Russian plane! Can you imagine to shoot down the plane of the second most powerful state in the world, and on top of that, a state the Ottoman Empire and the Turkish Republic havealways been most careful not to alienate?Because it violated your airspace for a few seconds? Can you imagine to have its pilot be killed by Syrian Turkomans while making his descent, using arms provided by the Turkish Intelligence Service (MİT)? At a time the Turkish warplanes violate the Greek Aegean airspace almost every day?

-What will be possible consequences of downing Russian warplane Su-24 on Turkish-Syrian borderfor Turkey in political and in economic senses?

I don’t even want to think about it.

In the economic sense, we already have an idea: Mr. M. Şimşek, Deputy Prime Minister in charge of economic affairs in the cabinet evaluated the final damage as 9 billion dollars.

As to the political consequences, anything is possible; I cannot predictright now. Too early. More to come.

-How will this effectour region, especially Armenia, on security of our country? Some experts are concerned now, that the Turkish-Russian conflict or stand-off can be moved from Syria to our region, on Armenian-Turkish border and on Nagorno Karabakh conflict zone. What can you say about this kind of opinions?

I don’t think there is a danger for the Caucasus region for the time being. But the Russian airbase in Gyumri will now be moreimportant for Putin, I mean one of the two Putins in on the scene, the Russian one, the other one being the Turkish Putin. This might further increase Armenian dependency on Russia, a situation Armenia does not like very much, of course.

-I read in the media that Turkish society and Turkish media are very concernednowby Russia’s increase of military equipment in Armenia. What are the real moods in Turkey on this issue?

This is not anissue in Turkey, at least right now. I think this is the result of an introvert psychologycreatedby the quasi-isolated situation of Armenia, and aggravated by the N. Karabakh conflict. A true dialogue with Turkey would have greatly helpedto break this isolation, but this is no Armenian fault. It’s definitely the Turkish fault.

-Yesterday, when newsspread that Azerbaijani tanks shelled positions in the Nagorno-Karabakh for the first time in 21 years, some Armenian experts commented this in context that Azerbaijan wouldn’t do this without the consent of Turkey. How would you comment this? How much is this linked with tensions between Turkey and Russia?

I don’t know. This may seem odd to Armenians but Turkey is under Azerbaijani tutelage more than it’s the other way around. Just think of the Oct. 2009 A. Gül-S. Sarkisian protocols killed by Aliyevwhen the latter threatened Turkey of increasing the energy deal prices. On the other hand, Azerbaijani shelling would increase, not decrease, Armenian need for Russian assistance.

-Do you agree with the opinion that Turkey is encouraging Azerbaijan against Russia’s ally Armenia?

I already answered this in your two last questions.

-What perspective have Turkish-Armenian relations, if we take into account all these developments, especially situation in Russian-Turkish relations?

No perspective in the immediate foreseeable future, mostunfortunately. I say most unfortunately because normal relations between Turkey and Armenia would’veservedboth countries tremendously, alsothe regional peace in the Caucasus area, and Azerbaijanalso.