Emigration memories of an Armenian child: A journey of grief without grudges 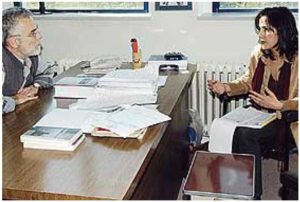 ‘I would have died when I was nine years old; this life is the grace of God to me. I am playing in ‘overtime,’ says Kerkyasharian

Without memory, a human being would not be able to construct his humanity or sustain cultural heritage. Given that memory lapses lead to irreversible trauma, what would happen if there were any interruption or blow to the collective memory?

An ongoing discussion concerning the tragic events in Anatolia during World War I that cost Turkish and Armenian lives has focused on the term “genocide,” a blind and harsh term that makes discussing the issue almost impossible. However, one essential point seems forgotten during this hopeless debate:The tragic events of World War I, whatever you want to call it, belong to the Turkish collective memory as much as they belong to the Armenian memory.

“When this book is published it will be an obligation to accept that Armenians really suffered a lotbecause of Armenian emigration. This is so significant because one of the most important reasons, maybe the primary reason, for Armenian pressure on Turkey is Turkey’s explanation of the events as, ‘We took Armenians to safer places so they wouldn’t suffer,’” political scientist Baskın Oran said in an interview with the Turkish Daily News.

Oran was referring to a book published by the İletişim Publishing House that has been on the market since last Friday. He spoke to the TDN as the editor of the book prior to its publication.

‘Emigration Memories of a Child Called M.K., 1915 and Following Years’:

Manuel Kerkyasharian (Kırkyaşaryan in Turkish) was nine years old and living in Adana in 1915. He emigrated with his parents, whom he lost along the way. His mother committed suicide before his eyes and his father died soon after. The following 10 years of his life passed with him desperately seekingother members of his family, moving through villages of southeast Anatolia, Mosul and Aleppo before finding relatives in Cyprus. Before his death, he decided to relive his 10-year-long journey. He did this in 1980 when he was 74 and recorded his travels on audiotape. He requested that his children, Stepan and Madiana, listen to the tapes only after his death. Kerkyasharian passed away in Sydney in 1997. Stepan Kerkyasharian, 62, contacted Oran, sent him the tapes and subsequently decided to publish Kerkyasharian’s memories. “Emigration Memories of a Child Called M.K., 1915 and Following Years” is a collection of these memories without any corrections or proofreading. A former student of Oran, Dilek Ertürk Güzeler, who is blind, typed the transcript using her strong sense of hearing. İletişim, together with purchase of the book, includes a CD containing Kerkyasharian’s recordings.

‘Finding his family almost by smelling’:

“My name is M.K.,” he says while starting to recount his memories and is why the book’s title does not contain his full name, Kerkyasharian. Oran wrote a preface to the book and preferred to stick to Kerkyasharian’s explanation on choosing the title.

Kerkyasharian’s explanation of calling himself only by his initials makes one think that he was still under the influence of bitter childhood memories when he was speaking into a tape recorder in Sydney, even at the age of 74. However, it is difficult to find in his memories long explanations about the violence he witnessed during his journey. He relates the most tragic moment of his life, his mother’s suicide, in only a few lines.

“What impressed me the most about these memories is that Kerkyasharian did not bear a grudge, although he had experienced deep grief,” said Oran.

Referring to the ongoing debate on what Armenians experienced during World War I as “genocide” or not, Oran emphasized the term genocide is a non-starter for such a discussion, the non-use of which would have actually created an environment of dialogue between the Turkish and Armenian peoples.

“The term genocide triggers a defense mechanism in Turkish people. The Turks had no idea about these events, and when they were told that the events were similar to the Jewish genocide, whereas there is no similarity between the two cases, the Turks could not take it. It was too much for them,” Oran said.

However, Kerkyasharian’s memories have nothing to do with today’s debate as it is not possible to lookfor a “consciousness of ‘Armenian-ness’,” emphasized Oran.

“The child’s age prevents us from seeking any consciousness. He is a pre-pubescent who cannot even speak Armenian,” he said, recalling that the only language Kerkyasharian could speak was Turkish untilhe arrived in Cyprus, where he found relatives and eventually learned Armenian.

While talking about the pre-publishing process of the book, Oran said there was only one point that Kerkyasharian’s son Stepan interfered with concerning the content. Stepan’s objection was, surprisingly, not about the wording of his father’s memories but about the dedication Oran wrote in the foreword.

“To the saint memory of Kerkyasharian, who did not bear any grudge, despite all he suffered, and of the sinless hundred thousands of people who lost their lives during, before and after that tragedy of humanity due to Turkish and Armenian nationalities,” Oran wrote at the beginning of the dedication.

A life that is the grace of God:

It is interesting to hear that the son of a father who was a victim of ethnic conflict has been working as a commissioner in the Community Relations Commission for a Multicultural New South Wales in Australia.

Stepan Kerkyasharian is the head of a commission that promotes multiculturalism, ethnic affairs, cultural diversity, community unity and harmony in one of the most culturally diverse states in the world.

When one reads his father’s memories, and knowing Stepan’s good character, one cannot help but think that it is maybe because of the motto Stepan heard several times from his father:

“I could have died when I was nine years old; this life is the grace of God to me. I am playing in ‘overtime’.”

Reading the memories of those bitter times from a child’s point of view may refresh the collective memory of people living in Turkey, which is a collective memory lacking knowledge. Oran referred to a maxim by the Greek philosopher Epictetus, who was born in Anatolia in A.D. 55: “It is impossible to begin to learn that which one thinks one already knows.”